Who runs this place? 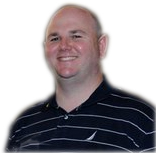 Chuck is a native of Sumner County, he started his IT career while still in high school working for Sumner County Board of Education after school. He attended the University of Tennessee at Martin and studied computer science. While at UTM Chuck worked in the university's IT department and the Center of Excelence for Science and Math Education. After college, he worked at an internet service provider based out of Nashville designing web sites and was their network administrator.

He then became the local IT manager for an international shipping company. After two years there the entreprenual bug bit and Chuck started doing IT consulting for small and medium size businesses. Chuck started Sumner Technology Group in 2013 to build a business in his home town of Gallatin.

Chuck is a member of the Gallatin Rotary Club, where he has served in many roles, including: Club President, Club Vice President & Secretary. Currently he is the Assistant Governor in Rotary District 6760 that assists all of the Sumner County Rotary Clubs.

Matt is originally from a small town in West Tennessee. After high school Matt attended the University of Tennessee at Martin where he received a Bachelors of Science in Management Information Systems. After college Matt continued to further his education with a Comptia A+ Certification. Matt is also currently works with the City of Gallatin as a Technician II, where he is responsible for computers, servers, updates, and future recommendations.